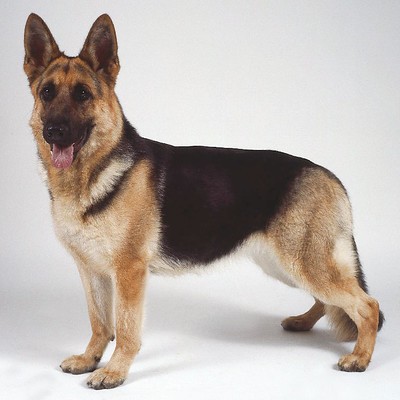 German Shepherd also known as Alsatian is believed to be the direct descendant of the bronze age wolf. There is evidence for the existence of a similar type shepherd dog in Germany but with a lighter coat during 7th century AD.

The Present German shepherd breed was first introduced in Germany in 1882 by a German Fancier, Rittmeister von Stephanie who is the developer of this breed. Later the breed gains popularity in other countries including the UK and the US.

German Shepherd is intelligent, highly alert and the best companion dog. They are strong and well built. German shepherds are impressive performers in dog shows, highly eminent as police dogs, guide dogs for blinds, and excel in numerous other roles. The German shepherd is a genius breed, skilled, and highly trainable. They require proper training and a job to do to keep them physically healthy and mentally happy forever.

Gently brush the coat daily. Give a mild shampoo bath twice or thrice in a month.

German shepherd needs plenty of exercises. It is best to channelize its superintelligence into tasks such as obedience training and fun games.

The average lifetime of the German Shepherd is 13 years.

German shepherds are strong, loyal with alpha tendencies. They have a strong intent to protect their masters. They are calm but a strong fighter. They show very strong aggression towards any threat.

10 Largest Dog Breeds in the world

Find Pets Near You