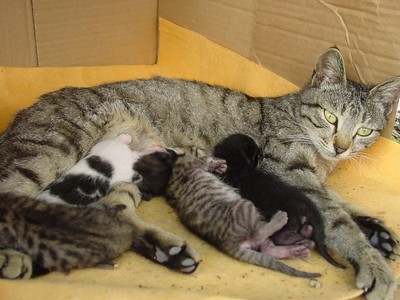 Nowadays, cats no longer live a natural life just like us humans don’t either, and since we already love meddling in nature, we are responsible for it. Therefore, to give our cats a peaceful, healthy, and long life, it is good to neutering or spaying a cat. This will prevent the uncontrolled breeding of animals, prevent the offspring of cats from coming into the wrong hands or wandering, getting sick and suffering, but we will also prevent various diseases caused and spread by mating.

Why Neutering or Spaying a Cat?

In the areas of a relatively mild climate, cats begin to mate as soon as the day is longer than 12 hours, mostly as early as January and so until the fall. This applies to cats leaving the house that cannot be prevented by the owners from mating. Cats can have three litters during the year. If on average in each litter there are three to five or even six kittens, we can easily calculate that one unspayed cat brings up to 18 kittens a year. These same kittens become reproductively mature by the age of 6 months.

If the cat does not leave the house, where it is warm and there are enough light and food, it is very likely that it be in heat throughout the year. As such a cat does not have the opportunity to mate, it usually goes from heat to heat, which will certainly drive people crazy with their constant meowing, raising their tail, rolling, rubbing against objects, and the like. Often, owners ask if it is important for a cat to have one litter, but there is no medical reason for your cat to have at least one litter before being sterilized.

Unspayed cats are at risk of getting mammary gland tumors at an older age, the most common (over 90%!) being malignant adenocarcinomas. Specifically, the glands have receptors that bind hormones secreted during the heating phase (estrogen and progesterone), so spaying the cat before the first heat reduces the risk of developing mammary gland tumors by 40 to 60 percent.

A very important reason for Neutering or Spaying cat is to prevent all the needless deaths and suffering of poor unwanted kittens, who end up in rivers and lakes, nylon bags, containers, and sewers. Those lucky enough to be rescued before dying need good homes. There are too few quality foster parents and cats are very difficult to adopt into good hands.

If you have a cat yourself, and if you have doubts about what is best to do, we hope this text helped you make the right decision and do what is best for you and your cat.

Flea And Ticks in dogs & cats - Symptoms, Treatment, and Prevention
Feline Infectious Peritonitis (FIP) in Cats Symptoms and Treatment
Cat Vaccinations - Everything You Should Know